[encrypt] allows you to store sensitive data in your databases, files and carts. There are a number of encryption methods available in WebDNA.

If method is not specified, then standard WebDNA encryption is assumed.

Do not lose or change your seed value, as it is unrecoverable; the developers of WebDNA cannot recover encrypted values without the original seed.

When writing your encrypted value to a database, you must wrap the encrypted value in double [url] tags. When reading them back out of the database, use a single [unurl] context. See explanation* below.
Example WebDNA code:

Explanation of the [url] requirement:
When writing to a database, any value that has potentially misunderstood characters, such as "&" "=" and "]" must be wrapped in a [url] context to change these characters into ascii equivalents (&, etc.). When reading data out of a database, WebDNA automatically converts these escaped characters back to normal characters, so no [unurl] is needed. However, with encryption, some of the encrypted characters may be high ASCII characters that are not encoded enough with a single [url]. Running it through a second time will encode them properly. Because WebDNA is already applying one [unurl] to anything coming out of a database, you will only have to add one [unurl] to balance the two [url]s.

Use this table as a guide to ensure a proper encrypt value:

Hash algorithms are one way functions.
They turn any amount of data into a fixed-length "fingerprint" that cannot be reversed. They also have the property that if the input changes at all, the resulting hash is completely different. This is great for protecting passwords, because passwords should be stored in a form that protects them even if the password file itself is compromised, but at the same time, we need to be able to verify that a user's password is correct. This is known as "one way" encrytpion.
When the user attempts to login, the hash of the password they entered is checked against the hash of their real password retrieved from the database. If the hashes match, the user is granted access. If not, the user has entered invalid login credentials. The "un-hashed" password is not stored so it can never be recovered if the data is ever compromised.

How to encrypt your templates

Use the following WebDNA to do all of the necessary steps at once:
1) [encrypt] the file and add the special WebDNA header tag to the beginning of the file.
<!--HAS_WEBDNA_TAGS[!][/!]_ENCRYPTED_2-->
2) Note that any unencrypted text such as copyright information should be inserted before the header tag. The encrypted WebDNA must start on the line after the header tag. In the example below, to automatically convert the template (file.dna) to an encrypted template (newfile.dna), execute the following on another page:

After using the above template, the file named "newfile.dna" can be used, confident that no-one can read or modify it. "Serving" the template form your web server works just like any other template. 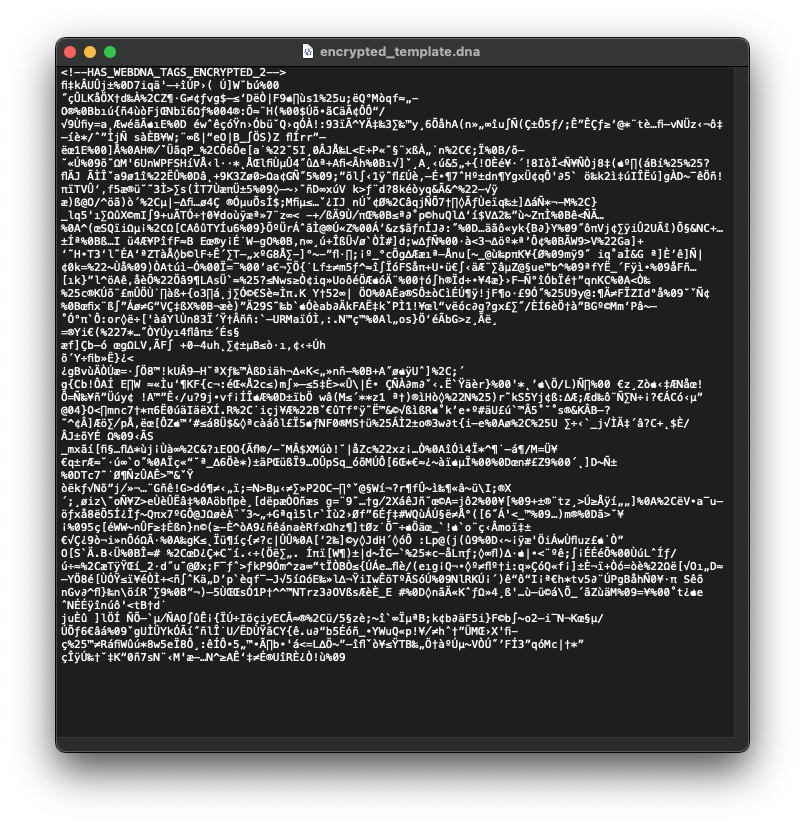 [!][/!] is a special trick to fool WebDNA into thinking this page is not an encrypted page, and should be treated like a normal template. The [!][/!] is removed during processing, which causes the resulting template to contain the correct tag that indicates it is encrypted.

In order to prevent someone from displaying or accessing the decrypted templates, the following precaution has been made: [include raw=T] cannot be done on encrypted templates; nothing is returned.

[decrypt] simply decrypts the encrypted values.
As per the guidelines of [encrypt], be careful to [unurl] values.
Use this table as a guide to ensure a proper decrypt value: